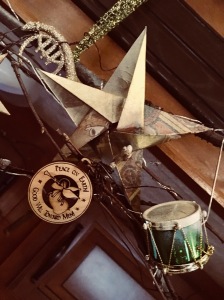 Luke 2:1 In those days Caesar Augustus issued a decree that a census should be taken of the entire Roman world. 2 (This was the first census that took place while Quirinius was governor of Syria.) 3 And everyone went to their own town to register. 4 So Joseph also went up from the town of Nazareth in Galilee to Judea, to Bethlehem the town of David, because he belonged to the house and line of David. 5 He went there to register with Mary, who was pledged to be married to him and was expecting a child. 6 While they were there, the time came for the baby to be born, 7 and she gave birth to her firstborn, a son.

This journey of Mary and Joseph to Bethlehem is so romanticized [make something seem better or more appealing than it really is]. In my mind it’s a serenely beautiful story of a faithful man and a very pregnant woman traveling at an inconvenient time. I see the image in my mind of them traveling alone on that road to Bethlehem carried along by the promises given by angels that the coming “holy Child shall be called the Son of God”  That image is further supported by many movies and books…but…

Then I started pondering the bottom line of what makes their story real…and beautiful too. Did they realize the birth was that close? What was the trail like? How far could they go in a day? Where did they sleep? How did they cook? What did they eat? How did they manage the required ritual cleansing? What about sanitation? Weren’t there many other people and animals on the same trail?

I don’t know any of those answers but here’s what I do know…Mary and Joseph were real people, in real circumstances with real choices. Each chose to believe their own promise received from an angel despite the impossible circumstances. They chose to obey the law of their heritage and go to the city of David to do what was required of them despite the timing. They chose to be obedient even when they others would say they had no choice in the matter. .

Their lives were filled with legitimate opportunities and reasons to say “no” to  circumstances beyond their control but instead they chose to say “yes” to  God.   God bless choosing “yes.”