Matthew 21:8 A very large crowd spread their cloaks on the road, while others cut branches from the trees and spread them on the road. 9 The crowds that went ahead of him and those that followed shouted, “Hosanna to the Son of David!”  “Blessed is he who comes in the name of the Lord!”  “Hosanna in the highest heaven!” [NIV]

Today is Palm Sunday.  I know many of us will have the opportunity to hear the message of Christ provided by our Pastor’s via the internet. That’s a blessing.  We are living in a new reality where dependence on community worship is restricted.  We won’t be surrounded by a crowd of like minded people gathering together to remember this day as the moment of triumph when Jesus begins His final journey to the day of our salvation.  We won’t be hearing other voices raised with our own as we shout Hosanna!  There are no waving palm branches to prompt our memory of the past.

The pomp and circumstance of public celebrations has been temporarily swept aside but Coronavirus can’t deprive you of your Hosannas, “help” or “save, I pray!”  Today we are the ones who must prepare the way for Jesus to enter into the midst of our exile.  “Hosanna to the Son of David!”  “Blessed is he who comes in the name of the Lord!” Blessed is he who comes to complete His identity in you right there in your own home and offers you the opportunity to complete your identity in Him through a different kind of personal experience.  Today Palm Sunday worship is up to you.

“Hosanna in the highest heaven!”

Psalm 86:5 You, Lord, are forgiving and good, abounding in love to all who call to you. [NIV]

Let this songa be a part of every heart in worship today.
I love you, Lord
And I lift my voice
To worship You
Oh, my soul, rejoice!

Take joy my King
In what You hear
Let it be a sweet, sweet sound
In Your ear

aLyrics to I Love You, Lord by Petra from Petra Praise 2

If you’re unfamiliar with this song.  There are many places on the internet you can listen to it and sing along.

The Firsts: James 1 – Words as Worship

NIV 1:26 Those who consider themselves religious and yet do not keep a tight rein on their tongues deceive themselves, and their religion is worthless. 27 Religion that God our Father accepts as pure and faultless is this: to look after orphans and widows in their distress and to keep oneself from being polluted by the world.

Not all words are reliable evidence of truth.  What is true is that our words as believers count as evidence of our relationship to Jesus and that requires we “keep a tight rein on [our] tongues.”  James was writing to people just like us who struggle with the temptation to waste our words as weapons to wound or masks to hide behind.

Weaponized words to hide behind are everywhere today.  They’re one of the easiest ways we can be “polluted by the world.” This is James urgent reminder to us that our words are part of our worship.  The words we speak every day have an impact on Jesus’s reputation as as surely as those we speak in church on Sunday.  William Barclay says it this way “…worship is empty and idle unless it sends a man out to love God by loving his fellow-men and to walk more purely in the tempting ways of the world.”

“No, O people, the Lord has told you what is good, and this is what he requires of you: to do what is right, to love mercy, and to walk humbly with your God.” [NLT Micah 6:8].

Those are God’s words.  Amen. 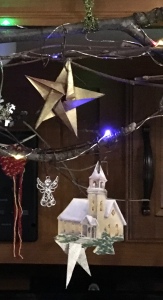 Matthew 2:1-2 After Jesus was born in Bethlehem in Judea, during the time of King Herod, Magi from the east came to Jerusalem 2 and asked, “Where is the one who has been born king of the Jews? We saw his star when it rose and have come to worship him.”…11 On coming to the house, they saw the child with his mother Mary, and they bowed down and worshiped him. Then they opened their treasures and presented him with gifts of gold, frankincense and myrrh.

The Magi were men who still had the desire for God in their hearts.  Desire was why they watched for a sign. When they recognized the star they prepared their gifts and took that first step of a long journey expecting God would to lead them to a king.

People really do still have the desire for God in their hearts. God has pulled out all the stops for us during this season with many different and personal signs to guide us to “the one who has been born king,” the Big Event. This is our modern-day version of the journey but it’s still all about desiring God, watching for the signs, preparing our gifts of worship and then taking that first step expecting God will lead us to the King.

These are the perfect gifts of worship if you’re short on gold, frankincense and myrrh.
• Give Jesus your desire.
• Offer this new born priest your long journey.
• Let him be King of all your expectations.

Mark 2
•19 How can the guests of the bridegroom fast while he is with them? They cannot, so long as they have him with them. 20 But the time will come when the bridegroom will be taken from them, and on that day they will fast.
•21 No one sews a patch of unshrunk cloth on an old garment. Otherwise, the new piece will pull away from the old, making the tear worse.
•22 And no one pours new wine into old wineskins. Otherwise, the wine will burst the skins, and both the wine and the wineskins will be ruined. No, they pour new wine into new wineskins…
•25 Have you never read what David did when he and his companions were hungry and in need? 26 In the days of Abiathar the high priest, he entered the house of God and ate the consecrated bread, which is lawful only for priests to eat. And he also gave some to his companions. 27 The Sabbath was made for man, not man for the Sabbath. 28 So the Son of Man is Lord even of the Sabbath.

Jesus doesn’t intend his words to be rules. They’re meant to help you be the very person he’s created you to be. It wasn’t until I re-read these verses several times that I saw a connection between these four red letter verses. They’re all about paying attention to what you’ve been given.

Is Fasting denial or sacrifice? It’s both. Denial of food can be a diet or it can become a sacrifice of worship when it changes your attention from the visible act of eating into hunger for God to act. Hunger is the signal that it’s time to kneel, read scripture and pray instead of eat. Pay attention.

Jesus uses vivid word pictures to get our attention about how to deal with the old and new in our relationship to him. Don’t settle for the unsuccessful results of letting what he’s done for you be only a new patch that dresses up an old habit or try to squeeze a brand new part of your relationship to him into an old lifestyle. Pay attention.

Jesus has the right, power, and authority to declare your denial and sacrifice worship when you’re hungry and in need. Pay attention to him.

Hebrews 6:1 Therefore let us move beyond the elementary teachings about Christ and be taken forward to maturity, not laying again the foundation of repentance from acts that lead to death, and of faith in God, 2 instruction about cleansing rites, the laying on of hands, the resurrection of the dead, and eternal judgment. 3 And God permitting, we will do so.

Sunday Thoughts:
I would much rather be told what moving “beyond the elementary” looks like than to be reminded I haven’t. So after the warnings in Chapter 5, I’m grateful for the encouragement of this first part of Chapter 6 that begins “Therefore Let Us…”

Those three words include you and me – we are “us.” Us means I am not trying to figure this out all alone.  Jesus secured the foundation of our repentance for “us” with his forgiveness and his promises. God has revealed himself to “us” in his Word and in the sacramental events of faith. Worship is an opportunity for “us” to “…be taken forward to maturity…And God permitting, we will do so”…together.

Tagged Maturity, Together, Us, Worship